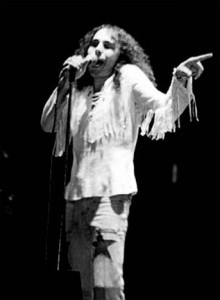 Tonight the news reached me of the death of one of my favorite rock singers ever, Ronnie James Dio. Once the singer with Rainbow, later with Black Sabbath and own band Dio, then with a revamped Black Sabbath, which they had to call Heaven & Hell.
Ronnie was a great singer. He wrote great melody lines, which often were not easy to sing. Surely not a shouter or screamer. This guy really could sing.
I met him on a couple of occasions during the Rainbow days. He was such a nice person.
There are many songs related to Ronnie. The stand out classic for me is Rainbow’s Catch The Rainbow, but he delivered also unforgettable tunes like Man On The Silver Mountain, Stargazer, Gates Of Babylon (all with Rainbow), Heaven and Hell (with Black Sabbath) and ofcourse the great Holy Diver album with his own band).
I remember seeing him at a Rockpalast broadcast with Heaven And Hell last year, thinking: what a way to rock at this age.
Sadly a stomach cancer came up, a hard thing to deal with.
I remember Ronnie. Hope you catch the almighty Rainbow.