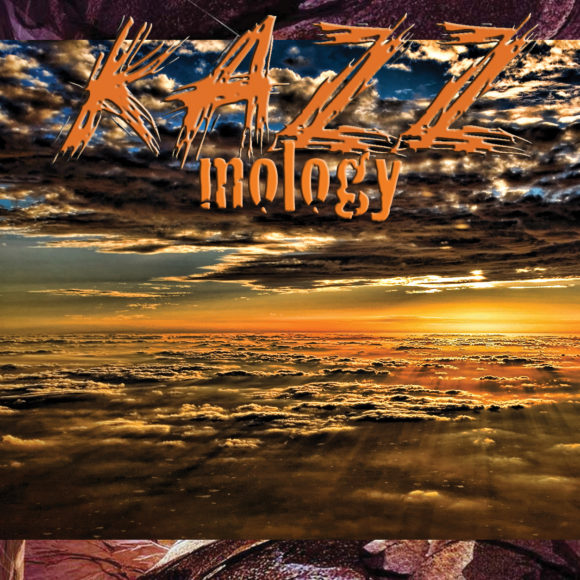 KAZZmology is the ninth album by Kazz (not counting the B.Loose album).

Three tracks take you away. Through the dreamy Kazzmoss and the organic Kazzmoron you get into the 43 minutes of Kazzmology, which is a real audioadventure. 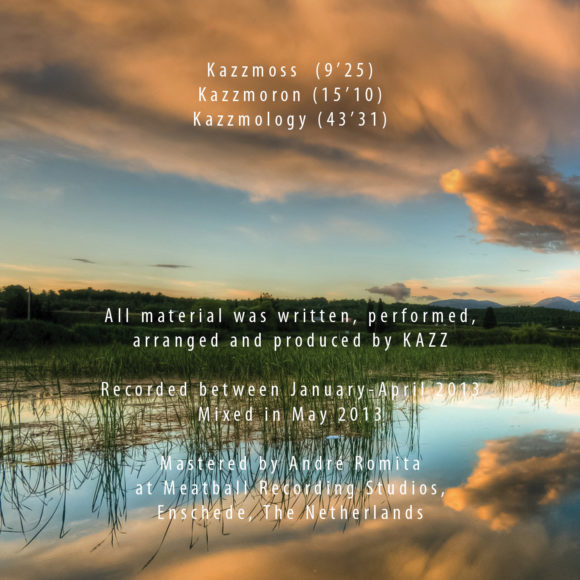 As usual the album is available for free. It comes in two formats, 320 kbps mp3 and (for the first time) FLAC.

With the download you also get the artwork, which includes an interesting email conversation. You can read it below.

Kazz made a special dance remix of the endtune, which is only available on YouTube. On Kazzmology you will hear the music in a much longer, and slower, version.

Listen to/watch this and two other parts (in demo form) from the album.

You can also listen to the full KAZZmology album online.

In April an email came in from Rodrigo, who has been a long time emailfriend from Argentina. He had some well overthought questions, which I thought would be interesting enough to have them published here. Enjoy this!

I have some questions for you to answer if you like, so I can use for an article.

Your upcoming album Kazzmology is your ninth production since your debut Trancedancer in 1998. How would you describe the way your music has evolved since then?

That’s an interesting question, Rodrigo, to start with. There have been various changes in the way of playing, composing and recording. Musically I can say every album had its own moods, so to me they are all different. The first four albums were strongly rooted in the seventies music, Klaus Schulze for instance. On  Monologue Interieure, the 4CD set, I tried to use sequencers in all kinds of ways. But that’s where I got to the point of not liking sequencers that went on for ten minutes or longer. Transformation in 2006, which was based on the great fireworksexplosion in my town in May 2000, had no sequencers at all. It was all one long audioexperiment, without any rhythm or loops. Then came a four year period, where I had my blues phase, culminating in the album B.Loose in 2010, by the way the album you didn’t count. After that blues rock album I started recording electronic music again, but with a very different point of view. On Whispered Dreams was the first album I recorded without any keyboards or synths, only using my Mac. Secondly, there were no extreme long tracks. All eleven tracks had its own theme. To make it work as a cohesive entity they all blended into each other. And the same goes for the two live tracks on Rainborough. And indeed, also for Kazzmology. The individual pieces are pretty short but are presented as an ongoing flow of sound.

So now to the new album, which I haven’t heard yet. In comparison to your last studio effort On Whispered Dreams, what has changed?

Just one word: the mood! OWD was quite a happy record. A lot of rhythm and percussion. Kazzmology has only a few percussive moments. There is quite some atmospheric sound, some call that ambient. The first 10 minutes, called Kazzmos, is just slowly building harmonic sound. It’s definitely different than previous albums.

On your website there was some talk about a project with vocalists, called Innavision Outavision. What happened?

I started working on that after the Regensburg show in November 2011. Though I had ideas for the eleven pieces of music, and recorded some demos, somewhere I lost the inspiration to get on with it. So I put on hold. Maybe I will get on with it. It was a great idea to have a show with various vocalists, singing solo or in duets. But it is a different way of working. I am used to work from improvisation, but when various voices have to be combined you need more structure.

The same question about a project once mentioned called Music For Cloudspeakers.

That was the first thing I started after the bluesrock album in 2010. It was going to be a full ambient album. I had recorded about 30 minutes of music, but then felt blocked. Nothing came out that fitted to it. I still have the recordings so maybe one day I will finish it.

On your website a short open air gig is mentioned from last year. You played a song with a female singer and another instrumental song. Was it recorded?

No, it wasn’t recorded. The song with the female singer was written for the Innavision project. She did a great job improvising on the music she only had heard once. But we sadly parted ways. The other composition was an instrumental dance tune, which is only meant for live gigs. There is a studio recording available on YouTube, but it won’t be used for future releases.

B.Loose was your short return to rock and blues in 2010. Do you consider singing again in the future?

It wasn’t a short return. I was introduced to blues in 2002 through the local blues club. I soon joined the jam sessions, which was fun because I hadn’t been singing for 4 years. And after Transformation I found myself starting writing bluessongs. This was an emotional period, so there was something to write about, which I could never have done with instrumental electronic music. I just HAD to sing. From the initial idea to the final recording took three years.

I still join local jam sessions and have fun. I can’t really say anything about recording songs. I have some songs on the shelf, but I don’t see a recording in the near future.

You used to sing real hard rock music in the past. Do you still have that passion?

The passion is still there, but I have to confess I have some limits in my vocal reach. At 56 it ain’t that easy anymore, so I rather sing some blues. Every now and then I rehearse with some good friends of mine in  a coverband called Grabsplatter. They have a real fine lady vocalist, who isn’t able to rehearse every week, so I kind of fill in. Which is great fun. Singing old Deep Purple, Rainbow or Led Zep tunes.

Can you be more specific on what to expect on Kazzmology?

No, I can’t. Like in the past, you have to listen to it. I still like to call it picture music. That once was an LP title from Klaus Schulze, and I still like to refer to it. Just listen to the music, turn it on loud, eventually put on your headphones and make your own movie. Dream away, fantasize, or fall asleep, which I still think is a compliment.

Any plans for the future?

First of all, I’d like to finish my remaster of the Monologue Project before the end of the year, which is not that easy. And I have some invitations to perform some intimate Living Room concerts in Germany at the end of the year. But I have to prepare these carefully, which really takes some time. I’m not the kind of guy who says ‘OK start the sequencers, let’s roll’. And I have some work to do on a couple of new things. You see, I never ‘replay’ music live on stage and I always want to give the people some new music. And I don’t know what is going to be in the set from this new album

Many people want to know about Tim Blake’s New Jerusalem. Will you ever play it again?

No, I’ve done with that. I played it at Regensburg because so many people wanted to hear it. That was it. It’s a part of the past now. I have seriously thought of doing an updated version with all the modern technology, but I won’t do it. I’ll leave it up to Tim Blake to play a final performance. I hope he will do it, but I have my doubts if that will ever happen.

Kazz, thanks for your time!

No thanks, Rodrigo, my pleasure