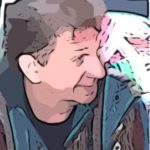 First of all Happy New Year to you all!

I’d like to thank you, wherever you’re from, for a fine year. Sadly I wasn’t able to do more than just the one gig at Zoutpop.

It was great to see the international attention for the B.LOOSE album grow and grow. The CD went out to 22 countries.

Now that the second edition is sold out, a third edition is on its way. No fooling around with extras or odd sorts of this or that.

Well, enough about the past.

What am I gonna do in this upcoming year.

I started working on a new electronic album this Christmas.

I had already been working on another project called Music For Cloudspeakers earlier last year. But I had to put it on hold because I lost the inspiration to finish it.

The new album will be pretty much different to the electronic albums I released between 1998-2006.

There will be a lot of rhythms around.

All basic tracks have been finished now, but I have to do some work on the solos.

The title of the album will be ON WHISPERED DREAMS.

I expect to have it all finished by late March-early April.

The album will not be released as a physical CD. Therefore it will be available as a download.

And yes, my dear friends, it will be for FREE!!!

The past few months I have been invited by some old friends to play living room concerts again.

Between 2000-2004 I played quite a lot of living room concerts in Germany, which was really great to do.

This will take place in the summer period. As usual, these performances will only be for those who are invited. As a consequence the dates will not be made publicly available, but I will let you know here how it was. All shows will be recorded, so expect a live compilation later in the year.

Oh yeah, don’t remind me. Really getting’ old. This year I ‘have’ to celebrate the fact that it was 40 years ago when I took my guitar and started singing on a market square every Saturday.

I have in mind to arrange something to celebrate it, but at this time I can’t tell you how. Probably I will invite some good friends and do a gig somewhere or maybe even record something.

Ofcourse it will include some of the songs I played in those early days (Dylan-Young stuff etc).

In 2010 I have started rereleases of old solo stuff, all now available again as FREE downloads (find them in the DISCOGRAPHY section). It was nice to see that lots of you had great fun with them. I will continue doing that this year with my first solo CD Trancedancer being the next subject to release. Initially a private 2CD it was commercially released as a single CD in Germany. This year you will be able to get the original real thing, the full 2CD. For those living outside Germany, who have have never heard the now out-of-print  single CD mix, this will also be available again. This might very well interfere with the Living Room Concerts, due in July/August. There have been quite some mails from people asking for rereleasing stuff from bands I’ve played with, especially ETERNAL FLAME. Well, all I can say, I will talk with the boys and see what can be done. This site will keep you posted when there is any news about it.

For now, enjoy the rest of wintertime!

With love from me to you,