It is ten years since Kazz released his first ever live album, ‘encores@home.de’.
It marked his break up with the german company who had released his first two albums. The company refused to release the album because of a long ambient piece.
With the return of Kazz to Regensburg early November, where the major part of the album was recorded, ‘encores@home.de’ will be available again in the series of archive free download albums.
Earlier archive releases included Kazz’ CD-debut album Trancedancer (1998) and Transformation (2006). See Discogrphy section.

Kazz will perform his first solo show since February 2006 on November 5th in Regensburg at Mikey’s Barn. This is a Living Room Concert. Entrance is only for invited guests. Mikey sent us his flyer, pictured below. Kazz will play the full On Whispered Dreams album plus a couple of new compositions. The concert will be recorded, with a possible CD-release in mind. 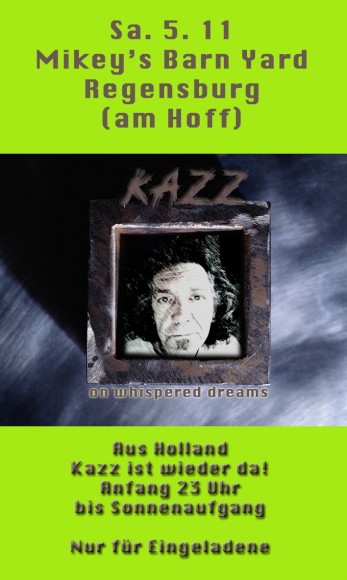