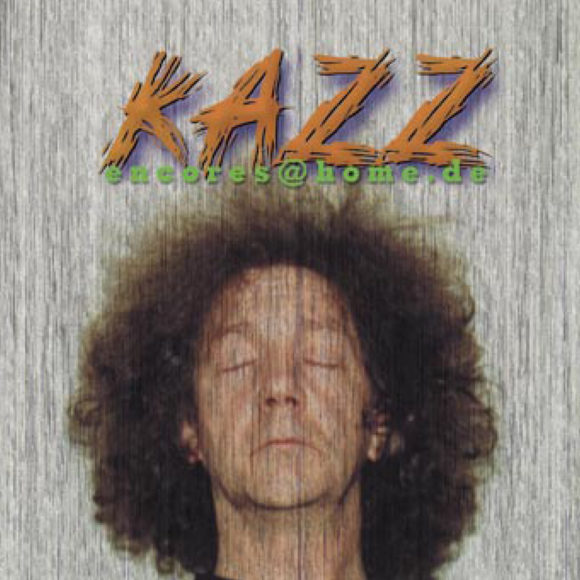 In our series of free downloadable albums here is another one. For all of you to enjoy.

encores@home.de is KAZZ’ third CD, originally meant to be released in 2001 on a now defunkt German label, that also released his first two albums Trancedancer and Willingen. But it was not going to be.

All material was composed, arranged, performed, mixed and produced by KAZZ.
Recorded on various locations during the Germany Living Room Concerts Tours 2000-2001

A LIVE ALBUM WITH A STORY

encores@home.de is the story of disappointments and a whole lot of fun. It marked the return of KAZZ to release his music on private basis. And maybe most important, it was the year where he found out how to find the perfect environment for him to play his music live: at Living Room Concerts (from here: LRCs).

Soon after the release of Willingen in November 2000 frictions grew between KAZZ and his labelmanagement. Again they (the label that is) arranged various live gigs all over Germany, as with Trancedancer, mainly at dance-parties where KAZZ played the chill-out rooms.
KAZZ: ”It was fun for a while, but after some time it got boring. I never intended to dive into the dancescene, though there are elements of dance here and there, But I’ve never considered myself a dance-musician.”

Like on his first German Tour he met up with some people who invited him to come and play on private parties. KAZZ: ”I first did it in 2000 on a couple of occasions. It felt great to play for a small audience, who were all very motivated to listen to my music. And on almost every event I met new people, also asking me to come and play.” The ball was rolling.

Finishing in October 2001 KAZZ performed over 30 LRCs in Germany during the year. As a new CD-release was planned before Christmas it seemed the right idea to come up with a live-album as KAZZ had had no time to write or record new material. He had digitally recorded most of the LRCs. An obvious choice might have been to come up with the more familiar tracks from the previous albums.
KAZZ: ”I didn’t consider it too long. I preferred to give all these kind people, who came to the gigs, something special. I got a lot of requests to put on the live version of Trancefur. In 2001 the track had evolved from a four minute poppy tune, played as the gig opener, to a full 15-minute dancing drone, played as one of my encores. It has a long improvised opening sequence before the known tune starts. There is a new middle section brought in. Being a popular tune and also being totally different from the studio-version this could and should be on the live-album. It definitely suited as the opening track for a live album. Being an encore I soon came to the decision only to choose material that had been played as an encore. After playing a set with known material I like to round off the night with something new and unheard music.”

So there KAZZ found himself with hours of live recorded encores. And to those afficionados: yes, this was the tour where KAZZ played a remarkable rendition of a true Electronic Music classic from the seventies, being Tim Blake’s New Jerusalem. He had various arrangements prepared, choosing the version suitable for the evening on the spot.
KAZZ: ”Quite some people recognised the song and they immediately kept sending me emails asking to give the track a official release. I wasn’t too keen to put a cover song on the album and more important: there wasn’t a performance that was satisfying from beginning till the end.”
Fans had to wait until the release of the 4CD set Monologue Intérieure in 2004 to find themselves surprised with a 40-minutes-mix of various performances of the track, hidden on CD4.

The second album track was going to be a mix of two live recordings, both from Regensburg, same spot but with a year of timespace between them.
KAZZ: ”In 2000 I played a piece of music, that was a left-over from the Trancedancer sessions as one of my encores. In 2001 I had another leftover bit prepared. As they both sounded good to me and as they had the Trancedancer-connection, I decided to melt them together and call it Trancedancer 7. It was only afterwards that I found out they were recorded on the same location. Pure coincidence.”

The third and last track on the album turned out to be a crucial track. It was a long ambient track called Morning Light.
KAZZ: ”I found this an excellent example of what can happen at a Living Room Concert. It happened in Göttingen. It had been a hot summer evening at a party. I had already played three 60 minute sets and the host started playing some nice music on the stereo. About 4.30 in the morning the garden doors were opened to watch the sun rise. Then I was asked to play some music to accompany the sunrise. I selected some nice presets, which I thought would fit, and started improvising while the sun rose. When I stopped playing after 45 minutes I realised everybody had fallen asleep during the playing. Most of the people stayed at the place overnight, so did I. The next afternoon everybody came to me, saying thank you for the wonderful sunrise soundtrack.”

TROUBLE WITH THE COMPANY

That is what there is to say about the music. But the CD never got released as was intended. Where did things go wrong?
KAZZ: ”For starters the company agreed with the release of a live album. They were very much aware of my live performances at these tecno-gigs, where my main repertoire was based upon the most dancable tracks from the first albums. So they expected more or less a live rendition of these tracks. Well, I never intended to do just that, so my choice of tracks came much as a surprise, especially the ambient track which they absolutely refused to release. There were some discussions whether I would deliver the more known tracks, but I made my point very clear. There was no way that these people would force me to release music I didn’t want to. After all, there was this small line in the contract saying I had total freedom of creativity. In my opinion this was against the contractual agreement. I told them quite clearly this would mean the end of the contract. It took some time, until they agreed with me leaving. But they had no choice. We agreed that they would put a hold on selling my CDs through shops and mailing lists. It was simple as that. One year later the label closed down due to financial problems. But I am convinced it all had to do with pure mismanagement. And not knowing how to get on with their artists. I have nothing against amateurs, I am not a professional musician myself, but very dedicated. And I know what I want. And I certainly don’t wanna be fooled.”

This left KAZZ back to where he once began: selling his products on a private basis. He decided to make some of his music available through a couple of free mp3 download sites like mp3.com and sell his music through email order only. KAZZ: ”The nice thing is you get to know every single person who buys your CD. There is a lot of emails going round the world. You can discuss the music with everybody in person. It is perfect. I guess this is what I dreamt of in the early 80s.”

encores@home.de was released through TSS even before Christmas 2001. And to his astonishment, many of those who bought his previous albums all were eager to purchase this first ever live release by KAZZ.
Offering free downloadable music on the internet immediately meant people from al over the world had the opportunity to discovering KAZZ’ music. In the first six months the live album was sold to people in countries like Argentina, New Zealand and South Africa. Countries that were hard to reach in the old situation.

KAZZ ON THE COVER

The booklet comes with the download as a PDF file.